Peter Ivany: Giving something back 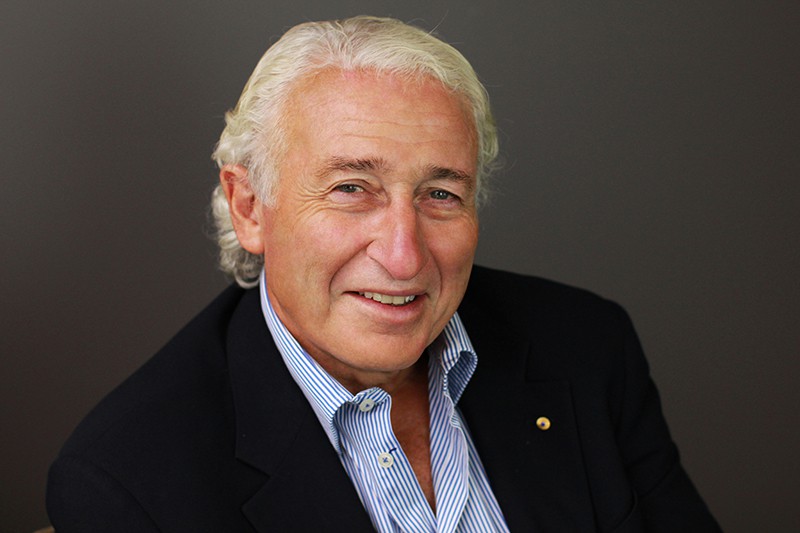 During his time at Hoyts Cinemas, which he ran between 1988 and 1999, Mr Ivany grew the business to over 2,000 theatres operating in 12 countries. Further business successes include home video rental business Video Ezy, and retailer Harris Scarfe, and he is currently the executive chairman of his own diversified investment company, Ivany Investment Group (IIG), as well as being equally, if not more, visible for his ongoing philanthropic activities and community involvement. Mr Ivany spoke with us recently to tell the story of how he made his wealth, shared advice on business for entrepreneurs, and explained his value system of giving back to the community.

“In 1981, Twentieth Century Fox had been just taken over by Marvin Davis,” Mr Ivany says, “an oil man from Texas. His group were more interested in the real estate than the theatre business, so they put the cinemas business, Hoyts, up for sale. My father-in-law, Leon Fink was one of a number of partners that owned two theatres in Melbourne and they ended up outbidding all the others for the Hoyts’ business.”

Mr. Fink and his partners invited Mr Ivany to be part of the newly extended business and in 1983 he, his father-in-law and two brothers-in-law bought out the other existing partners and began to run Hoyts Cinemas together. “We also ran a range of other businesses at that time.”

These other businesses included two public companies in radio and other media, advertising, film and TV production, including the largest radio network in the country at the time, Triple M.

When Peter was appointed CEO of Hoyts, in 1988, a particularly hard economic time in Australia following the 1987 property crash, there was much work to be done to try to turn around the business. This was eventually achieved with a lot of support, hard work, determination, and a lot of sleepless nights.

“In 1993 my father-in-law, Leon, passed away, and I was able to buy out my other partners with the help of Lend Lease and Hellman and Friedman, a private equity firm out of San Francisco.

“We bought Hoyts out in 1993, started to expand internationally and in 1996 we went public, having grown the chain from 40 to over 2,000 theatres around the world. We were public for two or three years before we decided to sell the business to Kerry Packer’s Consolidated Press Holdings (CPH) in 1999.”

“At Hoyts, we rebuilt and reshaped not only the Australian cinema landscape but the cinema landscape internationally,” he says. “We were the first group to build multiplexes in Australia the late 80s and by expanding on this format, we saw the level of attendance increase virtually four-fold from the time I started in the business to the time I finished. It was very exciting.”

Mr. Ivany considers this period of his career, which he calls ‘phase one’, to have ended with the sale of Hoyts in 1999 to CPH. After the sale of Hoyts, he began to investigate and invest in businesses in different areas. These investments culminated with Mr. Ivany establishing the Ivany Investment Group which also expands on his philanthropic interests and activities.

A driving force for Mr Ivany in all his businesses is the idea that through business acumen and generating profits, his companies could make positive changes for the whole, creating social benefits as well as economic ones.

Rather than spending more of his life building another company, as he did with Hoyts, travelling and filling his time with work, Peter wanted to give something back to society at large, and he wanted to do it in Australia.

“After the sale of Hoyts, I decided to spend half my life in philanthropy. It was an easy decision for me to make because I wanted to make a contribution, and hopefully a difference, to the community that had given me so much. The interests that I had, I just continued with them. I’ve stayed in film through AFTRS (Australian Film, Television and Radio School), NIDA (National Institute of Dramatic Art), the Jewish Film Festival and the Sydney Film Festival. I delved more into the sporting community with the Sydney Swans’ organisation and the Sydney Cricket Ground Trust. I was involved in art through the Art Gallery of NSW and the Museum of Contemporary Art and, of course, the Jewish community with the Jewish Communal Appeal. Also, I serve as an Adjunct Professor at University of Technology Sydney where I lecture and teach. So those are the few areas I’ve developed more fully in philanthropy.”

Having had the experience of living on a kibbutz at age nineteen, Mr Ivany developed a social conscience early on in life, and it has stayed with him to this day. His experiences with Hoyts, both good and bad, helped him meet the challenges faced in his philanthropic endeavours, ultimately helping them to succeed.

“I spend approximately 50% of my time in philanthropy and 50% in business. During the tough times of 2008, and even these [COVID-19] times, you end up spending more time in business, when it needs it, but over time it sort of averages out so that there is a balance.”

Backed by an excellent team at IIG, Mr Ivany can utilise his entrepreneurial skills on the business side to make sure it all runs smoothly and to ensure that they provide safe cash flow investments that in turn allows him to continue with his philanthropic endeavours and find that balance that he enjoys. For him, it’s never been about ‘who’s got the highest net worth.”

Mr Ivany still enjoys the business side of his life. IIG is diversified with its investments in property funding, technology, stocks and bonds and private equity and while some investments are passive, some are active. It is the active ones that provides him an opportunity to use his experiences and contribute mostly to the visions of others. He has spent considerable time over the last few years working on and developing the businesses of the Sydney Zoo, Allied Finance and IMAX, currently three of his larger projects.

“In the past I’ve been involved in quite a few ‘active’ projects that not only build businesses but also increases shareholder value such as Video Ezy and Tourism Asset Holdings Limited, “TAHL,” managed by Accor Hotels, which was Australia’s largest hotel operators.”

The diversification between passive ventures or investments allows him to be able to allocate more time to his philanthropic and community-based work.

“The philanthropy is not just a time commitment,” Mr Ivany says, “it’s also strategic. You’re helping people build their organisations and helping them reach their visions for the community. The not-for-profit sector is growing rapidly, probably because more and more people are finding that, not only is it an important way to spend their time, it is also vastly fulfilling to be involved with organisations that benefit social welfare.”

When Mr Ivany found himself in the position to buy out his partners at Hoyts, he had no real experience of what he was going to be up against and therefore he had no fear. This is something he admits was key to his success.

“For approximately three years, between 1987-1990, we were facing huge losses, so I had to ask the question, do I go and do something else or do I try to find a way to make it work? At the core of it, I believe I am someone who likes to find solutions and who isn’t afraid of the hard work it takes to make things happen and even in this situation, I truly believed that I could find a solution. When I put CEO on my business card it enabled me to make the often tough, necessary decisions and slowly we made our way back from the negative and started turning it into something positive.”

Mr Ivany admits that the most important skill in that situation is to back yourself and have a vision. You can’t look at it in terms of risk analysis, because the risks are too big. Mr Ivany feels the main traits of entrepreneurship are having confidence, backing yourself and working around the clock.

“We were able to find hope when there was none,” he explains. “We restructured the whole business by reducing our bank debt, we sold off surplus assets and significantly improved our profitability in our core business.”

Making a business successful is all about finding the small positives, which Mr Ivany did as CEO of Hoyts, and then timing it right to find the solutions. In the late 80’s they could have sold the business cheaply and moved on elsewhere, but they held out because not only did he enjoy the business, he believed in it.

“I’m not going to say that there weren’t some dark nights, nights where it was hard to see the future. There were times when you get very little sleep, and there was no balance in your life. We made it with the most finite of margins.”

At age 35, Mr. Ivany found that people were beginning to believe in him on the back of this incredible turnaround. This kind of success can provide an enormous amount of confidence for somebody in a leadership position – and confidence is key.

“What I have found is that once somebody has become used to running a business themselves, and has achieved a certain level of autonomy, their skills become far more general than specific, and in effect they make themselves virtually unemployable in any other format.”

“If you want to continue to work, then in effect you have to continue to be an entrepreneur, because really there is no other solution. It’s difficult when you have run your own business, made the decisions, and reached a certain age to then pivot into an institution with multi-layered, bureaucratic systems. I’m not saying that it can’t be done, just that it is difficult to do.”

Entrepreneurs are often born by realising that they are leaders rather than followers. Once they have found a way to live this lifestyle, it’s all about finding the right people who share the vision and lead them effectively.

“At the end of the day, I work with a small team. I’m still involved in every aspect of all the businesses, but it works, because you don’t have those layers of bureaucracy to slow you down and you don’t have to ask for permission. With everyone contributing, you can get ahead of your competition and you take out all the obstacles to success.”

“Even with big businesses and governments that are full of executives, politicians, and policy makers the final decisions are made by one or two people, it’s just the way the structures work. The key to success is to have one clear direction that everyone is pulling towards.”

“That’s sort of how it worked for me,” Mr Ivany concludes, “and then basically I’ve continued that way of doing things across a number of different organisations, and it’s been effective and it’s been helpful, hopefully. What I’m most proud of, in a sense, is that every organisation I’ve been involved with are still thriving today.”

Peter Ivany has had an entrepreneurial career that has spanned more than 40 years. During this time, he has worked through the highs and lows that comes with the territory of hard work, determination, and strong business practices. He counts himself fortunate to be able to take this opportunity to use part of his wealth to give back to the Australian community. For more information on Mr Ivany’s investment firm, visit www.ivanyinvest.com.au.