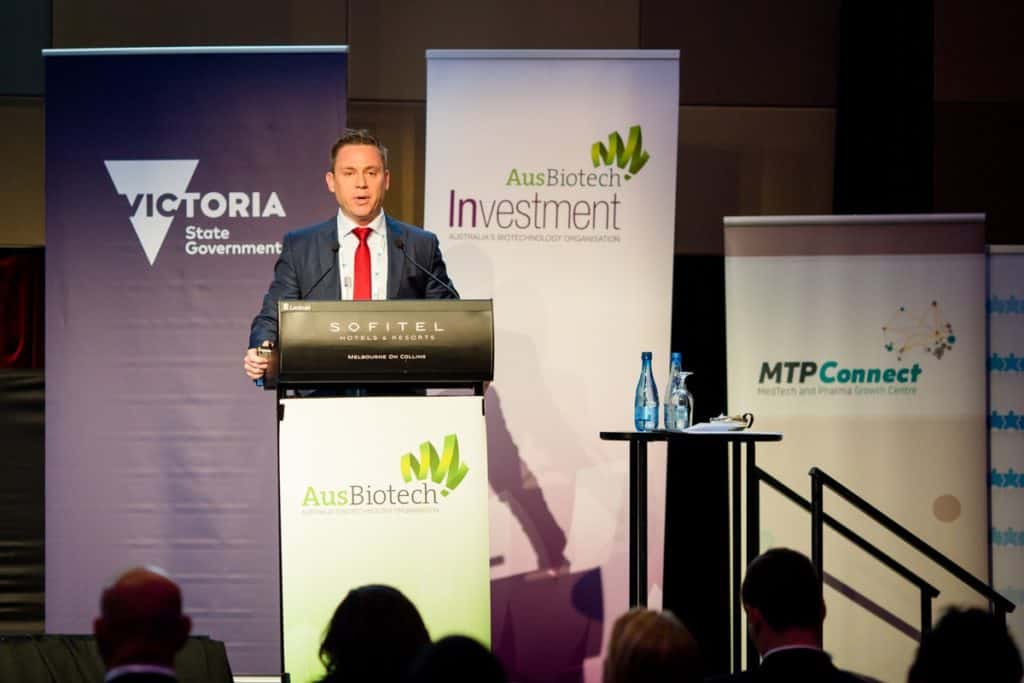 Brent Barnes is the CEO of LBT innovations (ASX: LBT), an artificial intelligence company which has made its mark as a designer of ground breaking advanced automated technologies for microbiology laboratories.

Brent Barnes’ career in technology began at the Sydney-based global headquarters of Cochlear, tasked with moving the company’s paper-based configuration and document management processes to an electronic-based system over a period of two and a half years. His time in Sydney led to an opportunity to relocate to the North American head office of Cochlear in Denver, Colorado. His list of diverse responsibilities moved to include running technical service operations and logistic functions, start a manufacturing subsidiary and also run sales.

“A company like Cochlear exposed me to an extensive range of skills and opportunities, not only from an internal product development perspective, but also from a field and operations-based perspective, in being responsible for revenue and having access to live in certain countries,” Mr Barnes says.

After four years in the US, Mr Barnes moved back to Australia in 2011, remaining with Cochlear, he took on a role as the Director Asia Growth Markets and Operations in Asia-Pacific. His main role was to expand into new markets and grow sales and revenue growth in a diverse range of countries predominately in South East Asia as well as Pakistan and Sri Lanka.

“It’s really interesting looking at the different markets that exist in Asia, I had a really varied range of responsibilities which included going to countries such as Myanmar, which required establishing medical disciplines such as Audiology that didn’t exist, yet was required to market and sell cochlear implants into the country.”

As his skills strengthened and diversified, Mr Barnes was headhunted to become the CEO of LBT Innovations. The company was moving into a transitional phase toward commercialisation on a global scale. Knowing Mr Barnes would have the necessary skills and experience to not only help market their newest product, APAS, to global markets, however also establish a company strategy for future growth.

“It’s important to have someone with some background who understands the regulatory environment and the quality processes required for product development. More importantly, I had the experience with global markets and ability to navigate the sales process and commercialisation of distributors and direct sales teams. It also helped being successful in revenue generation.” Mr Barnes says.

LBT Innovations are an artificial intelligence company distinct in their field for having technology which is patent protected and FDA cleared. They made their first impression in 2009 with an invention which would later become MicroStreak, a technology for automated culture-plate streaking and inoculation which obtained the largest share in its market within just five years of global sales.

“During the past 11 years, we have brought two products to the market. The first is automating the inoculation in the streaking of the specimen on agar plates. Rather than a human needing to put the specimen onto an agar plate, we developed an instrument that did it automatically, and provided some automation with respect to that first step. That product was launched in 2009 and resolved between 2009 and 2015.” Mr Barnes says.

In parallel with their first product, LBT began work on the Automated Plate Assessment System, known by its acronym, APAS. APAS is an artificial intelligence technology that reads and interprets colony growth on an agar plate following incubation. “After incubation, the agar plate comes out. Rather than a scientist or a microbiologist needing to handle it, we’ve developed the technology that is able to automate that process.”

“The technology itself is quite unique, we have developed a portfolio of patents where we have global coverage on our core technology. We have some patents around the imaging apparatus that are unique to our own technology, and we have used artificial intelligence specifically to train our algorithms to interpret the colony growth on the agar plate. We have entered into a 50/50 joint venture and created the company Clever Culture Systems (CCS) who are the legal manufacturer of APAS products and responsible for bringing the product to market globally.”

The superiority of their technology was demonstrated in a recent FDA clearance announcement on October 10th of 2016 following a clinical trial consisting of 10,000 patients. 7,500 patients from the US and 2,500 patients from Australia took part in the global multi-centre study. The clinical trial and data were submitted to the FDA in December 2015 and the clearance was obtained to approve a “de novo” submission. “The ‘de novo’ necessarily indicated that there is no predicate device or no other similar technology that has received clearance for its intended application and use within the United States. Receiving that clearance in October last year was a really significant milestone.”

“The market, both from a capitalisation share price perspective and also from a microbiology perspective really saw this as a validation to the clients that it absolutely works. We worked collaboratively across a ten month period, and having gone through that process satisfied the FDA that the achievement of the output of the technology was successful.”

The FDA clearance was a great milestone for LBT Innovations, but the company was still twelve months away from having a product available for sales. The span between the FDA announcement and their marketable product caused major fluctuations in their stock value, and Mr Barnes described their stock market fluctuations as a “double-edged sword,” as their share price spiked significantly over a short period, signalling day trading, and created uncertainty in the investor’s minds as to what the company was doing.

“The positive part around all of this is that we ended up more than doubling the value of the company.” Mr Barnes says, noting that, since the FDA clearance, the company’s market cap peaked at ~$100 million, although has stabilised over the subsequent 12 months into “normal levels” of around $40 million.

“Placement in St Vincent’s Hospital, a highly regarded centre of excellence, enabled the evaluation of the instrument’s performance within a diagnostic pathology laboratory in an end user style setting with pathology scientists using the APAS Independence instrument over a six- week period.” Mr Barnes says, “The evaluation included over 3000 urine samples which were automatically read and interpreted, and the instrument was successful in triaging the negative plates, allowing microbiologists to focus on positive plates only. The APAS Independence will deliver efficiency savings in the reading and interpretation of urine cultures because all of the negative plates are removed from the workflow, allowing skilled scientific staff to focus on positive samples. In addition, the APAS Independence facilitated significant upstream efficiencies in specimen processing, which we did not expect.

“The evaluation provides further validation that the foundational technology works, and the instrument does deliver efficiencies in a laboratory.”

LBT Innovations have established their technologies in microbiology, but Mr Barnes and the company do not intend to limit themselves to a singular field. Looking out toward humans and human blood samples as well as applications in agriculture, the company is working to extend the training of their algorithms into other specimen types. “We’ve done the work with respect to the algorithms for urine, but there are other specimen types that we will still need to train to further expand its clinical use. So, blood, MRSA, sputum, wounds, swabs are all examples of specimens that we will need to further develop as part of our portfolio of what we call analysis modules, which we can provide to the market.”

“When joint venture company CCS release this instrument next year for sales, we expect to cover the majority of specimens and the majority of volumes. We want to make sure that we’re covering around 60 – 70% of all specimens that go through this culture plate workflow. We’ll then look to further expand the other specimen types.”

Another upcoming groundbreaking technology in its prototype stage is in woundview. The technology implements LBT’s FDA cleared artificial intelligence platform to look at chronic wounds and automatically calculate the surface area of the wound using a 3D camera alongside algorithms which identify tissue constituents and tissue types on the wound. “The focus is within the clinical microbiology segment, however woundview demonstrates that our platform technology can be applied more broadly.” Mr Barnes Says.

“A microbiologist will typically do between 40 to 60 reads per hour. The APAS Independence will be able to process 200 plates per hour. That’s at least three times faster than a human. This efficiency gain for the lab allows the scientists or microbiologists to focus on all the value-added activities that you really need them to be working on.”

“Globally there are around 27,000 pathology labs, however, based on market segmentation the addressable market size for labs to purchase an instrument is around 13,000 labs.” Says Mr Barnes, “Our return on investment calculations indicate the payback on a lab processing 400 plates per day is a little over three years. So we are focusing on those labs who process more than 400 plates per day. When labs get up to 800 plates per day, the return on investment is between one and a half and two years based on primarily headcount savings alone.”

Clever Culture Systems have made plans to develop comprehensive training tools which will train distributors based on customer feedback.

APAS Independence will be available in Australian markets by January 2018, following the St. Vincent’s evaluation. LBT Innovations is actively talking to other labs in the region in order to line up the next location to receive the instrument from the beginning of next year. Their product will be sold at a one-off cost of USD$300,000 and an annual software licence (SAAS) fee of around USD$30,000.

Mr Barnes intends to expand the capabilities and applications of LBT’s platform technology through opportunities to partner, merge and acquire other companies. Amongst these opportunities is their partnership with Chinese company Autobio, “We’ve been working with this company in China called Autobio, they have a market cap of around $4 billion and are listed on the Shanghai Stock Exchange. They are the largest culture plate manufacturer in China and they operate within the microbiology space.” Mr Barnes said, “We have transferred the patents of our founding technology, MicroStreak, over to them, and they will look to redevelop the instrument and bring it to market in China. They have taken a $2 million strategic placement in LBT to own around 4% of the company. Having a technology partner sitting on our share registry as a top shareholder is really positive and there is absolutely opportunity where we can cooperate and co-develop products.”

Mr Barnes’ effect and vision as CEO of LBT Innovations is to handle both the expansion of their company into world markets and development of their products in tandem. In his time as CEO he has focused on how he can bring the broad skills and understandings he has developed throughout his career into the new field of artificial intelligence. His role as the CEO is now to create an inflection point which builds on their past success and looks to build new opportunities for their groundbreaking APAS technology across global markets.

“What we are doing to scale up the company is really focused around building core capability and expanding the application of our platform AI technology, which builds on what we’ve achieved over the last 11 years. We’re also looking to really develop this platform technology, and that is through the employment of new resources to transition to insource capability rather than outsource to expensive engineering companies. I’ve built some real bench-strength in our organisation over the past 15 months and we are bringing science and technology together.”