Managing Director Les Tillack leads the company’s innovation and committed pursuit of this world-leading contract manufacturing. A bio-tech expert, Mr Tillack brings over two decades of experience, ensuring the organisation is able to continuously adapt to the changing needs of the industry. Mr Tillack spoke recently with The Australian Business Executive to discuss the two main types of drugs manufactured by Luina Bio, the issues and opportunities facing the biopharmaceutical industry, and the impressive recent growth that has seen the company expanding into new areas of development.

“What we do, in essence, is make biopharmaceutical drugs for use in human clinical trials,” Mr Tillack explains. “When drugs are being developed, they have to go through an extensive safety and efficacy testing process, which are called clinical trials.”

Luina Bio’s main function is to manufacture drugs for other companies that are intending to test their drugs in these trials. This is usually undertaken at the early phases of the trial, before a company establishes their own manufacturing arrangements.

“We manufacture two main types of drugs. We manufacture recombinant protein drugs – they are drugs where a custom protein has been designed to mimic various biological activities in the body. We take bacteria that have been genetically modified, to then express and produce those proteins.”

The second type of drug manufactured by the company is an exciting new class of drug in the microbiome space, an area concerned with the healthy flora of bacteria that people have inside and outside their bodies.

“The theory around microbiome is that various disease states are being caused by having an imbalance of unhealthy and healthy organisms. There’s been a lot of development happening now in manufacturing of live microbial biotherapeutics, which are essentially live bacteria, which are then used in these microbiome therapies.”

The company’s clients are generally drug development and pharmaceutical companies in the process of developing new products. This includes only a small number of Australian customers, with about 90-95% of work last year coming from overseas.

“They can be smaller companies that have taken a product that’s been developed at a university or research institute, which has been spun out into a development company, right through to multinational pharmaceutical companies that also have drugs in development that want to use the services of a contract manufacturer rather than their own facilities.”

Australia is also well positioned in the biopharmaceutical space.

However, the country’s pharmaceutical space does have a positive global reputation. The regulatory system around manufacture of pharmaceutical products is particularly strong, and the work that comes out of Australia is well-recognised internationally.

Being one of the only companies of its kind operating out of Australia, Luina Bio doesn’t experience a lot of competition domestically. There is only one other contract manufacturer in the country, also located in Brisbane.

“[The company] is owned by a multinational corporation, Thermo Fisher, and they manufacture monoclonal antibody drugs from mammalian cell culture. We have a completely different service. We manufacture from bacterial and yeast fermentation.”

There are a number of other companies internationally that do the same work as Luina Bio, although the company has several unique selling points separating it from any direct competition, the primary one being its commitment to flexibility.

A company mantra of ‘how hard can it be?’ encourages this flexibility. Such an ethos can be seen in its work with microbiome products, most of which involve growing anaerobic organisms. These can be hard to grow, as they require no oxygen to be present during the entire manufacturing process.

About three years ago we were approached by a fairly large US drug development company, and we were asked if we could manufacture those products – could we grow anaerobic organisms under GMP? Our answer to that was, ‘well we’ve never done that before, but how hard can it be?’”

Within 48 hours, the company was discussing the idea with a senior member of the company at Luina Bio’s facility. It turned out the US firm had approached 39 other contract manufacturers around the world to do the work, none of which had been willing to try.

“The answer to the question was that it was actually very hard, but we persevered with it and have become now one of the world leaders in the space. We speak at a lot of the technical conferences, and we have technical expertise probably better than anybody else in the world in this space. We have a very high success rate, and we know that we’re doing very well in comparison to our competitors internationally.”

There is huge potential for growth in production of products from bacterial fermentation. The microbiome space is already offering exponential growth, but there are also significant opportunities in the recombinant protein space. 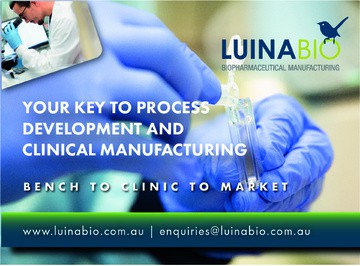 “The microbiome space is the next big thing in drug development. Everybody is rushing to get on the bandwagon with that one. We probably have about thirty discussions running at the moment with potential clients who are looking for manufacturing in that space.”

The growth in the recombinant protein space is also positive, with new technologies being developed which allow products to be manufactured using bacterial expression systems rather than mammalian expression systems, which result in a much lower cost of goods.

“I mentioned that we have very few customers from Australia,” Mr Tillack says. “It’s not because there aren’t potential products to be manufactured for Australian companies. The real issue is a lack of accessible capital for drug development companies, for our customers to take their product into clinical development. It’s very expensive.”

In other international areas, such as the US and Europe, capital seems to be much more free flowing, with companies being able to raise significant amounts of money to develop drugs and take them to trial.

“The microbiome product manufacturing space is actually very new. It’s really only existed in the last 3-5 years as even a concept, of taking live bacterial products into the pharmaceutical space. Regulators around the world are rushing to try and develop a regulatory system around those products, so that is leading to a fast-changing environment.”

With the regulatory rules in this space changing almost yearly, this presents a challenge in manufacturing and developing products for companies like Luina Bio, which must work hard to keep abreast of fast-changing regulations.

“We used to be a company called PharmaSynth, a wholly-owned subsidiary of a drug development company called Progen Pharmaceuticals. Just over three years ago an opportunity arose to buy the PharmaSynth company through a management buyout.”

This prompted a number of employees and other investors to buy PharmaSynth from its parent company, Progen. The result was a new independently held entity, which was later rebranded to become Luina Bio.

“We decided to rebrand and refocus the direction of the company, and we made the decision to change the name to Luina Bio. PharmaSynth was a little bit confusing, because it made it sound like we’re a synthetic chemistry company, rather than a biologics company.”

PharmaSynth came into existence in 2008, being a part of Progen beforehand. This particular group has therefore been performing contract manufacturing for about twenty-five years, with competing interests proving a barrier to any real success.

“Now that we have a complete mandate to chase the business, we’ve actually been very successful with it. Three and a half years ago, when we had the management buyout (MBO), we had twelve staff. Today we have 65 staff. We are currently recruiting and will be about 85 people in a couple of months from now, and we’re projecting that 2-3 years from now we’ll have 300-350.”

With this impressive growth in staff numbers, revenue has likewise been rising, increasing five-fold over the three years that Luina Bio has been in existence, and meaning the company is now significantly profitable.

“In 2017, we won the Queensland Export Awards in the Health and Biotechnology category, and in 2018 we were a winner in the Westpac Top 200 Companies of Tomorrow. So things are going very well.”

“The big new thing coming up for us is the development of a much larger manufacturing facility, to give us bigger capacity. The biggest challenge we face at the moment is the fact that the facility we have now is essentially sold out for more than twelve months.”

With there now being trouble fitting new customers into the facility, the company is looking to start construction on a newly designed and developed facility early next year, with manufacturing happening towards the latter part of 2020.

The future looks bright for Luina Bio, with rapid growth helping them become a significant player in the global biopharmaceutical space.

Find out more about Luina Bio by visiting www.luinabio.com.au.